Harmful algal blooms (HABs) are caused by a variety of marine and freshwater phytoplankton, many of which can produce potent biotoxins. These HABs can be ecologically and economically destructive, causing conspicuous mass mortalities in both wild and farmed fish and shellfish species globally. Although these impacts are substantial, little is known about the broader ecological impacts of HABs, many of which go unseen. In addition to observations of “fish kills” in the field, the vast majority of toxicology research has focused on juvenile and adult life stages of fish. Only a handful of studies have even evaluated the effects of a few HAB species on early life stages of fish (i.e. embryos and eleutheroembryos or “yolk-sac” larvae). Impacts to early life stages would likely go unnoticed in the wild and could have considerable consequences to the recruitment of coastal fish populations.

One particularly compelling HAB species is Cochlodinium polykrikoides, commonly referred to as the “red tide,” “rust tide,” or “mahogany tide.” Blooms of this ichthyotoxic dinoflagellate can cause rapid mortality to both fish and shellfish. Unfortunately, this HAB has increased in geographic extent, frequency and duration in many coastal ecosystems worldwide, likely due to eutrophication. Generally forming high density (103-105 cells ml-1) patches, these blooms can persist for many months and cover large coastal areas (>1 km2) in Asia, Europe and North America and often overlap temporally with the spawning events of many coastal fish species.

While the ichthyotoxicity of C. polykrikoides has been demonstrated using older life stages of fish, researchers have yet to identify the specific biotoxin(s) produced by this HAB or the broader
effects to ecosystems, supporting the need for future research. Because of the rapid toxicity of
C. polykrikoides to juvenile and adult fish, many have hypothesized that the impacts of these blooms to the ichthyoplankton, particularly early life stages of fish, may be significant and likely go unnoticed in the field.

A portion of my dissertation research, which I presented at the 2013 Annual AFS meeting in Little Rock, AR, examined the potential impacts of C. polykrikoides on early life stages of fish. Using laboratory experiments with three estuarine forage fish species common in the U.S. East Coast, I conducted a series of bioassays to (1) assess the toxicity of C. polykrikoides to embryos and eleutheroembryos of these fish species and (2) assess the sublethal toxicity to eleutheroembryos from exposure. My research confirms that newly hatched eleutheroembryos of several forage fish species can experience rapid mortality and dramatic sublethal effects to motility when exposed to C. polykrikoides, while in
general, survival was relatively high in embryos exposed to C. polykrikoides treatments until they
hatched. This suggests that the toxic agents in C. polykrikoides may not easily penetrate the chorionic membrane of these fish species, similar to what is documented for a variety of other toxicants. However, there may be other teratological effects from embryo exposures that we did not evaluate in our experiments but could be significant and only manifest themselves when exposed fish are more developed. Of particular significance was our finding that short-term exposures (15min) to bloom concentrations of C. polykrikoides can cause eleutheroembryos to temporarily lose their swimming ability, however motility can be regained if the eleutheroembryos are given enough time to recover in control water. This research is currently in review for publication.

This exciting research has shed light on to the potential impacts of C. polykrikoides blooms to early life stages of fish in coastal areas. Given the heterogeneous and episodic nature of C. polykrikoides blooms, these results can provide coastal managers and scientists with a better understanding of the potential impacts posed to coastal fish populations. Ultimately, as this HAB species increases in frequency and duration in many coastal areas, the effects on early life stages of fish need to be accounted for in order to understand the true ecosystem impacts.

I acknowledge and thank the Potomac Chapter of AFS for a student travel award, which allowed me to present this research at the 2013 National AFS meeting. 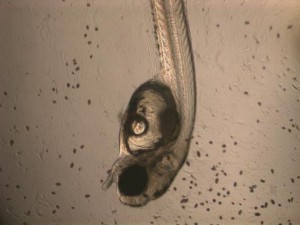