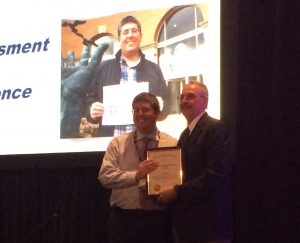 “We applaud the distinguished service of Lee Benaka and thank him for his continuous efforts to enhance member experiences with AFS,” said AFS President Joe Margraf.

Lee currently works with the NOAA Fisheries National Observer Program at the NOAA Fisheries Office of Science and Technology. For almost 15 years, Lee has specialized in the coordination of conservation engineering and bycatch estimation efforts.

Lee has worked with the NOAA Fisheries since 1999 when he was hired to help administer the Saltonstall-Kennedy Grant Program. From there, Lee worked in the NOAA Fisheries Office of Sustainable Fisheries as a Fishery Management Specialist for 11 years, and began working with the National Observer Program in 2013.

In 1997, Lee was selected as the first-ever Sea Grant Fellow with the American Fisheries Service. During his Fellowship, Lee organized a two-day symposium held at AFS’s 1998 Annual Meeting and also edited an AFS book based on the symposium, Fish Habitat: Essential Fish Habitat and Rehabilitation (1999).

For the past few years, Lee has served as a judge for the AFS Best Paper Award for Marine and Coastal Fisheries. Since 1998, he has organized numerous AFS symposia.