AFS Chapters succeed when they have regular injections of new leadership.  While being President of the Chapter may not be the most demanding thing I will ever do professionally, it does take a certain amount of dedication, innovation, and a willingness to pass the torch when the time comes.

To that end, and keeping in line with the national election season we are enduring at present, I’ll be rotating out a President at this year’s Annual meeting; we need a Secretary as the position is vacant. Once I leave the President’s slot, Ward Slacum will rotate out of the Immediate Past President role automatically.

We are fortunate to have one volunteer for the President both slots.  Dr. Cliff Hutt of NOAA Fisheries has come forward and expressed his interest in following me as President.  I am also thrilled to report that Erin Wilkinson has stepped up to step into the Secretary role.  Their Bios and pictures are below.  As no one else has come forward with a nomination for either position, the Chapter Officers have concluded a formal election is not needed – we will therefore proceed to an orderly change of Administration by Acclamation.
My Thanks to Cliff and Erin for volunteering.
President Elect – Cliff Hutt, PhD
Fisheries Management Specialist, NOAA Fisheries Atlantic Highly Migratory Species Management Division
Cliff recently joined the ranks of federal employment as a fisheries management specialist with NOAA Fisheries Atlantic HMS Management Division. For the previous two years he was a contractor supporting the NOAA Fisheries Office of Science and Technology. Cliff received his Ph.D. in Wildlife, Fisheries, and Aquaculture from Mississippi State University in 2012 where his dissertation research focused on the attitudes and economic preferences of recreational anglers. Cliff first came to NOAA Fisheries as a Sea Grant Fellow in 2013. His work at NOAA has primarily focused on assessing the economic impacts of recreational fisheries and the conservation of Atlantic HMS. Cliff has been involved with AFS for 20 years, since first joining an AFS chapter in 1996 while an undergraduate at Virginia Tech studying Fisheries Science. He has since been a member of the parent society, seven separate AFS chapters, and three student sub-units.

Erin is a Fishery Management Specialist with the Office of Sustainable Fisheries at NOAA Fisheries.  Erin received her B.S. degree in marine science from the University of Maine in 2008 and her M.S. in marine science from the University of New England in 2012. Her master’s thesis addressed consumptive and non-consumptive effects on juvenile lobster in southern Maine. Specifically, her research focused on striped bass and juvenile lobster interactions as well as anti-predator responses of juvenile lobster to the presence of some of their fish predators such as cod and striped bass. Erin loves lobster- both as a study subject and as dinner! She is also an avid traveler and spent 13 consecutive months living and working as support staff at the Amundsen Scott South Pole Station in Antarctica.  Erin has been a member of AFS for a few years and is excited to become more involved with the Potomac Chapter. 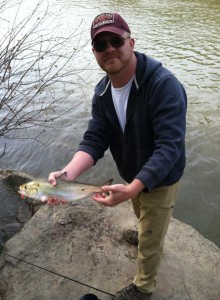